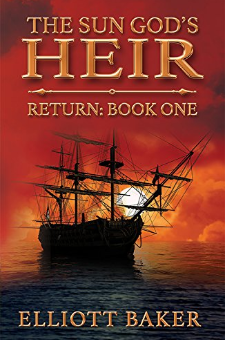 René Gilbert awoke shackled to the wall of a four-foot-high ship’s slave hold. The filthy bilgewater splashed over his head and then receded. Under sail.The North Atlantic, 1672. To survive, René must escape a slave ship in the midst of the ocean. Focus on the first thing, his fencing master’s voice rose from within his memory.“Don’t drown,” he thought. His second thought was the memory of a wooden rod speeding toward him for his sarcasm.Rapier sharp pulse pounding action across the warp and weave of the seventeenth century. Sailing ships, pirates, and past lives contend in this first book of an award-winning trilogy.Read The Sun God’s Heir: Return (Book One) and set sail into a time where love and life were precious and easily taken away. Where the distance to one’s enemies was measured by the length of a rapier’s blade.Alexandre Dumas meets Horatio Hornblower and The Mummy in this sweeping, swashbuckling tale. ?   Kirkus ReviewsThe Sun God's Heir: Return, is an epic story, taking you into a time where actions and words ripple from the past into the present and then invade the future. A truly remarkable story. ?   Readers FavoriteIn this epic fantasy, THE SUN GOD’S HEIR by Elliott Baker, readers are offered a unique and compelling story line. Baker’s vivid descriptions and well-drawn characters seem to shimmer with life. ?   Judge, 25th Annual Writer’s Digest Self-Published Book Awards.