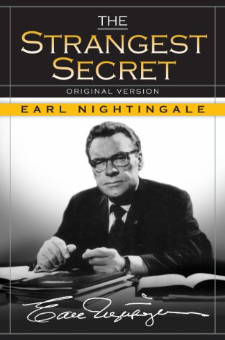 Six short and simple words.They are the "strangest secret."There are more than six hundred thousand words in the English language.And yet just six words...six short and simple words explain:* How one person with identical skills can earn hundreds of thousands and even millions more than another* How some people shoot to the top of the company while others are fired* Why some people live happy productive lives while people of identical upbringings and education stumble from failure to failure* Why some seem to achieve goals almost effortlessly while most can't seem to get on track* Why some marriages flourish while others end earlyIn 1956 Earl Nightingale shared these six words with the world in a recording he called The Strangest Secret. When it was released, it rocked the consciousness of the 1950?s.His recording, without any advertising or formal marketing, sold over a million albums and became the first (and only) spoken word message to win a Gold Record. It transformed lives and virtually created a new industry --- the modern day personal development/self help industry.In the printed word, as an eBook, the incredible words and wisdom of Earl Nightingale may be even more powerful.But either way, The Strangest Secret is indeed the single biggest secret to success that mankind has ever discovered.** Includes a Nightingale bonus book “How To Create Million Dollar Ideas.”** Includes an offer for FREE classic audio recordings of Earl Nightingale.