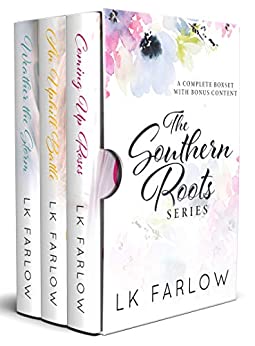 COMING UP ROSES: Myla Rose McGraw may be twenty, single, and pregnant, but she's no damsel in distress. She doesn't need a man. After all, her Grams taught her a thing or two about making lemonade out of life's lemons.

Then she meets Cash Carson.

Reeling from a bad breakup, Cash has sworn off love. It led to nothing but pain and misery, and he’s determined to move forward alone.
Until a redheaded Southern beauty crashes into him. With her shopping cart. At the local Piggly Wiggly.

If love wasn't for him, why did his heart beat a little faster every time Myla Rose sent that sweet smile his way?

He was no knight, and she didn't need saving.

But damn if he didn't want to try anyway.

AN UPHILL BATTLE: Azalea Barnes has hated Drake Collins since the day he broke her teenaged heart.
Fast forward almost seven years later and her libido still hasn't gotten the memo.
Now they're frenemies... with benefits.
Which suits Azalea just fine. She gets what her body craves while keeping her heart safe.
Kind of.
Mostly.

Drake has loved Azalea since the day they met. He knows that she's his forever. Too bad she only sees him as a good time. He wants more. Needs more.
If only he could convince her that it's real this time. He's more determined than ever to prove to Azalea that chemistry like theirs doesn't exist only in the bedroom.

The odds may be against Drake, but he's prepared to fight.

WEATHER THE STORM: Magnolia Ellington is all too aware that dangerous things can come in shiny packages. Her husband made sure to teach her that.

Desperate to escape his wrath—and his fists—she flees in the dark of night. Seeking safety and shelter with the only family she has left, Magnolia finds herself in the sleepy, Southern town of Dogwood—and in the arms of Simon McAllister.

Simon has always been more of a thinker than a doer. That changes the minute he meets shy and mysterious Magnolia. She has him rushing into action, ready and willing to do whatever it takes to earn her trust.

Slowly, with his steadfast determination and kind heart, Simon brings Magnolia out of her shell. But just as things start heating up between the two of them, the darkness of Magnolia’s past resurfaces, threatening to rip apart everything they’ve worked so hard for.

With their future hanging in the balance, Simon fears he’s losing Magnolia. He must find a way to convince her they're better together.