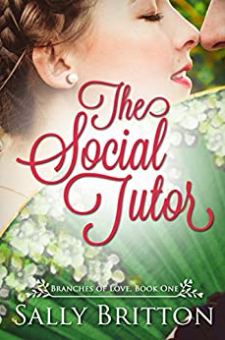 Her social graces are lacking, his finances are in ruin, but together they can solve both their problems. As long as they don't fall in love.After years of escaping etiquette lessons in favor of the stables, Christine Devon’s grand debut in London is only weeks away, though her deportment lacks the sophisticated polish she needs to achieve her goals of a lofty marriage. Desperate to take her place in society, she needs someone to instruct her in proper behavior.Thomas Gilbert, newly returned from Italy, is ready to begin his dream of founding a horse farm. But during his time away, the estate’s finances have dwindled to almost nothing. Unless he can find a way to save his family from ruin, he will be forced to sell his horses and give up his dreams entirely.A chance meeting between them may solve both their problems. Christine gains a tutor in the finer arts of polite behavior, while Thomas is given access to the finest bloodlines in England. But as time passes, the arrangement is less about business, and more about love. Will they see it in time, or will Christine leave Thomas behind for the splendor of London’s ballrooms?The Social Tutor is the first novel in a sweet Regency romance series. Each novel is a stand-alone romance but, read in order, are immensely satisfying. The novels in the series are:Prequel Novella: Martha's PatienceThe Social TutorThe Gentleman PhysicianHis Bluestocking BrideThe Earl and His LadyMiss Devon's Choice...and Book Six coming in March 2019