The Ship of State 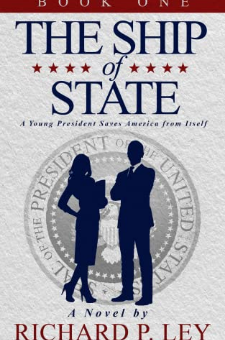 Can the president, a conservative ex-business executive with no political experience, navigate the shark-infested waters of Washington, DC?

President Donald Burlington’s party doesn’t support him, his wife of 23 years has just filed for divorce, and his country is falling apart from within. Both parties and the entire political establishment are eager to take him down because he is trying to eliminate the way the Federal government caters to special interests and emboldens entrenched career politicians to gain and maintain their political power.Meanwhile, his trusted assistant, Nicole, grows concerned by the president’s fascination with an international film star. Little does he know that the love of his life might be closer than he imagines.While trying to lead the nation and the free world, President Burlington must deal with contentious policy issues, foreign crises, terrorism, political enemies, and his own personal issues. He’s dedicated to keeping his campaign promises, and he’s not going to go down without a fight, but the water is murky and sharks bite.Featuring interesting characters and providing conservative solutions to real issues facing us today, this believable political fiction is what the world needs right now. If you enjoyed the movie, The American President or the hit TV series, The West Wing, you'll love The Ship of State.

*Note: The original title, Escape from Serfdom, was published in 2014, well before Donald Trump hit the national political stage, and has been "bigly" revised and expanded into books one and two of The Ship of State series.