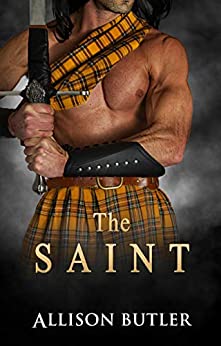 He has chosen a chaste life, but he's never been tempted like this...Callum has two childhood memories: a stone cross, and the wanton behaviour of his mother, memories that drive him to a take a vow of celibacy at the age of fourteen. Now twenty-four, Callum takes leave from his laird for a year to find the source of these memories and, hopefully, his origins. Weary of finding nothing but disappointment and sorrow at every Kirk and Spital he visits, and with his allotted time fast running out, Cal is compelled to escort a dying man's daughter south to Restenneth Priory. But he never expects the dark-haired woman's hope and determination to tempt him to recant his oath or to make him question everything he believes in.At the tender age of six, Isla Beaton learned a hard lesson about never giving up despite the challenges and grief that might come her way. Now orphaned and alone at nineteen, she has discarded her girlhood dreams of a love-match in marriage, but neither will she accept the betrothal arrangement set up by her father years before. Instead, she must rely on Callum, a stranger her father sends to her door, to deliver her to the priory where she will dedicate the rest of her life to God. But as their destination draws closer, the time she spends with Callum and the one kiss they share has her wondering if maybe there is hope for the treasured dreams of a girl after all.