The Road to Station X 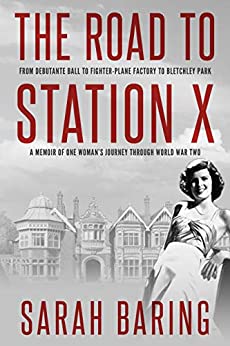 An engrossing account of working in the top-secret world of Bletchley Park during World War Two. Perfect for fans of Sinclair McKay, Tessa Dunlop and Andrew Hodges.

In 1938, Sarah Baring was enjoying life as a young debutante. Only a few years later, at the height of World War Two, she was working alongside some of the greatest minds of Britain in their code-breaking operations at Bletchley Park.

How did she end up in the top-secret world of cyphers and codes?

And what did she do within the confines of Bletchley’s Hut 4 that allowed the British Navy to be always one step ahead of their foes?

Like many young men and women across all levels of British society, the outbreak of war in 1939 dramatically altered the course of Sarah’s life.

Knowing that she could not stand by while others were enlisting, she left her position in Vogue magazine and signed up to work as a telephonist at an Air Raid Precautions Centre before working in a fighter plane factory to do her bit. The women that she worked alongside were unlike those she had known in her high society life and opened her eyes to a completely different world.

Yet, after just a few months, she was requested to leave the factory behind and was thrust into the world of intelligence, code-breaking and huge computers, rubbing shoulders with awkward geniuses like Alan Turing.

The Road to Station X provides a window into the life of a young woman that shifted from being a carefree debutante to factory girl to working with code-breakers in Bletchley Park as a result of the turbulent events of World War Two.

As the Daily Mail stated, “her natural modesty meant she hardly mentioned her vital contribution to Britain’s war effort.” However, shortly before she died she wrote her memoir which “revealed the truth about her role in the war.”