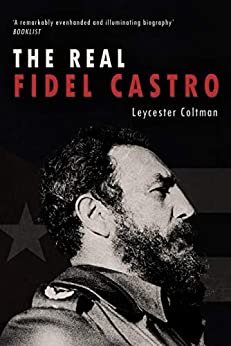 Fidel Castro has long been many things to many people; an idealist to some, a dictator to others. Neither assessment is completely true.

This book describes key events that shaped Castro’s life, from his political activism as a student, his years as a communist revolutionary and guerrilla fighter alongside Che Guevara, to his decades in power surviving the Cold War, assassination attempts, the missile crisis and the collapse of the Soviet Union.

As British Ambassador to Cuba in the early 1990s, Sir Leycester Coltman had privileged access to Castro, and the pair had many meetings and discussions. These conversations revealed the thoughts, personality and motivations of one of the most controversial figures in recent history.

The Real Fidel Castro is a first-hand account, and an authoritative biography, that provides a clear and dispassionate analysis of Castro, without the political rhetoric that typically accompanies any discussion of the man.

Praise for The Real Fidel Castro:
‘[Coltman] has produced a rare commodity - a balanced view of Castro … This book is very well-written and easily read’ - Anthony Daniels, Sunday Telegraph

‘From childhood rebellion to international confrontation, Coltman’s analysis of this obstinate and aggressive politician remains clear and impressively impartial’ - The Observer

‘Instructors looking for a suitable biography of Castro for use in the classroom should consider this text’ - Paul J. Dosal, The Historian

The late Sir Leycester Coltman was a member of HM Diplomatic Service for over thirty years. He became Head of the Latin America Department at the Foreign Office in 1989 and served as British Ambassador to Cuba (1991–1994) and Colombia (1994–1998). As British ambassador to Cuba in the early nineties, he had a unique opportunity to observe and study Fidel Castro during a critical period in Cuba’s history, both during and immediately after the collapse of the Soviet Union.