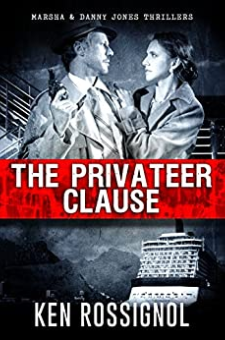 Step onto the promenade deck of the Sea Empress for a cruise of a lifetime and become part of the world's greatest series of murder mysteries and thrillers in the Caribbean. Marsha and Danny Jones retired from law enforcement and thought it would be just thing to break the boredom of retirement to be security consultants to protect the Seven Seas Company's finest ship from trouble. Terrorists, killers and sinister crewmen all plan,plot and purvey their own special brands of crime & death and the only roadblock in their chosen course is the special resilience of this pair of sea cops. Like all cruise ships, the Sea Empress sails year round, providing thrilling new mysteries and suspense for both passengers and crew alike. Your voyage here will last more than one cruise. Pour your favorite drink, suspend your disbelief, prop up your feet and enjoy. The question remains: will Marsha and Danny be able to save the ship from harm?Boarding now and be sure to bring your life jacket to muster stations as the Sea Empress leaves for the Caribbean in this first in the series of great sea adventures.Danny Jones: "My wife just shot our waiter between the eyes when he came in with breakfast! But, he had it coming to him as he had a gun on the tray and was going to give us Eggs Benedict with a Glock! Join Marsha and I as we work really hard to protect the Sea Empress and her passengers from threats from every direction. There have been so many shots taken at this ship by terrorists that the cruise line thought their business would sink. That is why we were hired to provide security. Things go so bad that the passengers were taking photos and video and emailing the explosions and hostage scene to CNN and Fox News. Instead of scaring off passengers, bookings for the ship went through the roof. The Seven Seas Company caught the spirit of the passengers and even set up a special for the ship theatre with a pirate theme!Finally, my wife and I needed a break and took a week off to sail on a private charter at the Grenadines and wouldn't you know, two local thugs dressed up as pirates tried to rob us while we sat at anchor for an intimate dinner for two. Well, our cook was great at other things besides her lobster spaghetti."A message from Robert W. Walker: "Ken Rossignol's Marsha and Danny Joins shipboard suspense series provide us insights into the inner circles of both the industry and security measures of major cruise ships as well as a rip-roaring, non-stop conflict and resolution. Rossignol keeps the reader's neck on the chopping block and fingers flipping pages." -- Robert W. Walker, author of Titanic 2012 & Bismarck 2013.www.RobertWalkerbooks.com