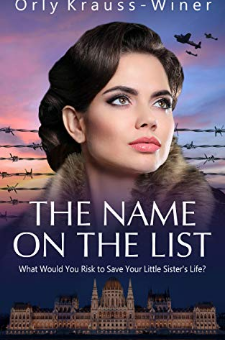 Don't miss your last chance to read the next book in this series for only 0.99 for Bookbub readers! The offer on Limor Regev's new WW2 book, The Boy From Block 66, ends today – so head over to Amazon right now.What if the person who betrayed your family is the only one who can save you now?

Hungary, 1944. Martha’s life is thrown into disarray. The man she considered her best friend, a Nazi recruit, makes a split-second decision to send her beloved husband to Mauthausen Concentration Camp.

Martha, stunned and hurt, refuses to forget his betrayal.

Israel, present. Martha’s granddaughter, Daria, is forced to embark on a cross-continent journey to investigate her family’s origins and an old secret that could lead the way to saving her little sister's life.

Slowly and patiently she manages to piece together this historical puzzle, exposing her grandparents’ extraordinary and chilling survival story during the World War II Holocaust. But once the truth is out, will she be able to forgive the unforgivable for the sake of her family?