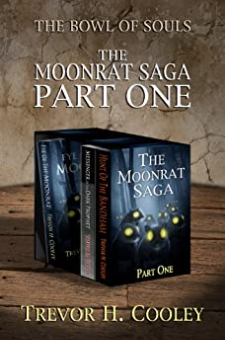 This compiles the first three books of The Moonrat Saga:Book One: Eye of the MoonratBook Two: Messenger of the Dark ProphetBook Three: Hunt of the BandhamDescription:What if you were terrible at the one thing in the world you wanted to do most?Justan was raised on the outskirts of the premier Battle Academy in the known lands. His only goal in life has been to enter the academy and become a powerful warrior like his father. Unfortunately, he has failed the entrance exams multiple times. He is given one last chance, but there is a condition. He must undergo a year’s tutelage under a fierce warrior woman from a far off land.Meanwhile, an evil wizard of immense power is transforming wild creatures into an army of monsters. Ogres and dragons, warriors and wizards are destined to clash, their fates guided by The Bowl of Souls.The Bowl of Souls series.THE MOONRAT SAGA1. Eye of the Moonrat2. Messenger of the Dark Prophet3. Hunt of the Bandham1.5. Hilt's Pride4. War of Stardeon5. Mother of the MoonratTHE JHARRO GROVE SAGA6. Tarah Woodblade7. Protector of the Grove8. Ogre Apprentice9. The Troll King10. Priestess of War11. Behemoth THE DARK PROPHET SAGA12. Sir Edge (2018)