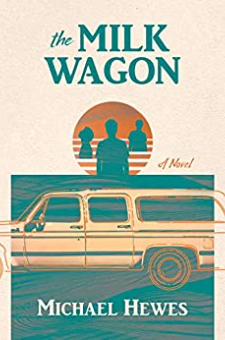 The Milk Wagon is a coming-of-age thriller about friendship, redemption, and how the ties made during high school can last a lifetime.Matt Frazier, Jason “Hop” Hopkins, and Mark Ragone have been close friends since elementary school. On the first day of their junior year of high school, a new kid named Nate Mayes arrives, and with him, a secret.Nate appears to be polished, flush with cash, and a potential lady-killer. However, they soon discover that something terrible is going on at home with Nate’s father, Dr. Ford Mayes. FBI Special Agent Kathryn Cooper believes Dr. Mayes has personally had a hand in several deaths relating to  a money laundering scandal involving compounding pharmacies, dirty physicians, and the United States Government. Her attempts to arrest him, however, are foiled by an insider working both sides. With her career—and social life—in jeopardy, Agent Cooper turns to her new chief-of-police boyfriend for help, but is he truly the cure-all she needs?When Nate stumbles upon a piece of evidence that ties his father not only to the money laundering investigation, but also to the death of his mother some fourteen years prior, he is devastated and filled with revenge. Enlisting Matt and his friends to help, Nate concocts a plan that will force them all to make unexpected and life-altering decisions. In the end, they will discover the shocking truth and finally understand the loyal bonds of family and friendship.The trusty Milk Wagon was there through it all.