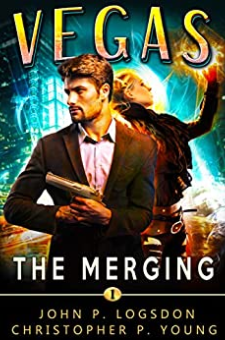 A set of naughty ubernaturals, a demon-powered mage, and wealthy amalgamite playboy who is far more than he seems.Ian Dex is a genetically engineered man who has abilities from all classes in the spectrum. He's also the chief of the Las Vegas Paranormal Police Department (PPD). His job is to monitor all supernaturals and their involvement in the world of normals. It's been a mostly boring gig, until now.A new breed of supernaturals has turned up and they're a lot tougher to deal with than your run-of-the-mill vampires and werewolves. These are larger, tougher, and stronger...and they laugh at wood and silver bullets. But fighting these ubernaturals only gets worse when the mage who created them arrives on the scene. He is bent on world domination, inflicting as much pain as possible, and walking around with his shirt open because he looks like a Chippendale's model. And to make things even more fun, he's using demons to give him an inexhaustible supply of power.Join Ian and his crew as they fight werewolves, vampires, fae, demons, a succubus, and a mage while trying to stop Vegas from getting flipped on its head!The Paranormal Police Department has delighted thousands of readers with action, adventure, outrageous (and often offensive) comedy, and tons of snark. Grab your badge and join the legion of fans who keep begging for more...What Amazon readers are saying about the Las Vegas Paranormal Police Department:????? ‘Fast paced and unpredictable, this book kept me reading! I was swept away by the imagery, the plot twists, the characters! Loved it!’????? ‘I bought this book on the recommendation of author, Orlando A Sanchez, for which I am very grateful because this book rocks it big time. Magic, Paranormals, both good and bad, irreverent humor...lots of kicking butt...and marvelous characters and story line.’????? ‘An awesome first book that will hopefully turn into a multi-novel epic. I've been a fan of Dresden and Iron Druid and this novel did not leave me the least bit disappointed.’????? ‘I love this series because it is so irreverent and seductive and caring and kind all at once.’????? ‘If you want UF that isn't depressing or average, Ian Dex is going to be your new best friend.’THOUSANDS OF READERS HAVE FOUND A HOME WITH THE PARANORMAL POLICE DEPARTMENT. GET YOUR BADGE TODAY!