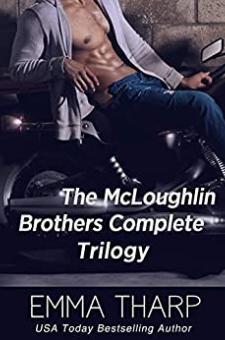 Three sexy brothers. Each with a story to tell.Moving On Does what happen in Ireland stay in Ireland? After losing her job, dealing with the double blow of her grandmother's stroke and finding out her boyfriend was cheating, Scarlette James needs a fresh start. What better place than Ireland to find your luck again?Braeden McLoughlin is handsome, strong, protective—and her friend’s ex—the epitome of forbidden fruit. And he’s in Ireland, too. When he offers Scarlette a vacation fling...two weeks to explore Ireland, and each other, Scarlette throws caution to the wind.With intense beauty surrounding her, and Braeden’s strong arms, things couldn’t be better. Until news from home threatens to ruin their vacation. Forced to leave Ireland, and Braeden behind, Scarlette can’t help but miss him and wonder how things would have ended if she didn’t have to leave.Back at home, can Braeden and Scarlette find a way to come together or will timing and circumstance keep getting in the way of their happiness?All In From the moment Jackson laid eyes on Amelia, he knew he wanted her. But she's his best friend's little sister. She’s off limits. Can Jackson resist her when she tells him she wants him too?Her curves, pale green eyes, and spitfire personality are what draw Jackson to Amelia. His best friend, Will, is what pulls him away.Amelia Stanton has always had a crush on her brother Will’s best friend, Jackson McLoughlin. But he’s a player and has never taken a second look at her. Until a chance meeting brings them together and the truth about their feelings comes to the surface.When the unthinkable happens, will Amelia and Jackson make it through an unexpected pregnancy or will Amelia’s brother, Will, put an end to them before they even begin?With the odds stacked against them, can Amelia and Jackson rise to the occasion or will they sink before they even have a chance to swim?Alive Again He needed a nanny. She needed a job. What they found was so much more.After ten years of being happily married to his high school sweetheart, Patrick McLoughlin thought he had it all. A beautiful wife, a career he loved, and a gorgeous new baby girl. All of his dreams were finally coming true.Until the day Maggie, his wife, walked out and never so much as left a note. Six months of radio silence.Patrick needs a nanny, someone to care for his daughter while he builds his empire. In walks Carsen Sanders - tall, sweet with a model’s body, and eleven years younger than him. She steps in and takes care of his daughter just like a second mom. He can’t help but have feelings for Carsen even though he knows it’s wrong in every way. What happens when Patrick and Carsen can no longer deny their mutual attraction? And will Maggie return to take back what’s hers?This boxed set contains mature content. 18+Other titles by Emma Tharp:What About Her (The Bluff Harbor Series Book One)What About Us (The Bluff Harbor Series Book Two)Drawn to DarkKeeping It CasualCrashing Christmas: A Billionaire Office RomanceAlways Just Us (Just Us Book One)Forever Just Us (Just Us Book Two)