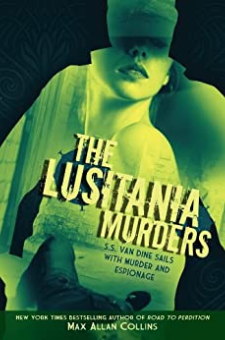 The Lusitania’s final voyage is a newsman’s dream. First come the torpedo warnings. Then come the murders…Journalist and mystery writer Willard Huntington Wright boards the Lusitania in pursuit of a hot story. Under the guise of conducting interviews with prominent passengers, his real assignment is to investigate rumors that the luxury liner is carrying illicit cargo for the British war effort against Germany.But Wright, traveling under the pseudonym S.S. Van Dine, isn’t the only passenger with an ulterior motive. Hours after the ship receives torpedo threats, three German stowaways are found murdered. And Wright suspects the deaths are part of a larger conspiracy. Comparing clues and matching wits with Detective Philomina Vance, the pair must solve the murders before the killer can sabotage the entire ship. Recreating the days up to the ship’s fatal encounter with a German U-boat, The Lusitania Murders is historical fiction at its entertaining best.