The Lost Man of Bombay 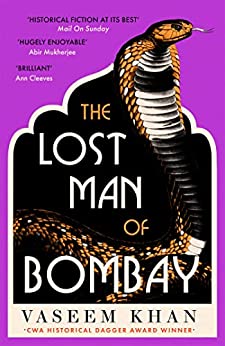 THE THRILLING NEW MYSTERY FROM THE AWARD-WINNING AUTHOR OF MIDNIGHT AT MALABAR HOUSE
'Hugely entertaining ... history and mystery mixed with brutal slapstick, thwarted romance and sly humour... If only all period procedurals were as good as this' THE TIMES
'The latest of Khan's excellent thrillers set in post-war Bombay is a vivid portrait of a society remaking itself in the new era of independence'MAIL ON SUNDAY
'A delightful book, well-researched, complex and hugely entertaining' ANN CLEEVES
'A twisting plot and an intriguing cast of characters, together with vivid glimpses of the vibrant, complex world of post-Independence Bombay - and a narrative that thunders along with the pace and drama of an elephant on the rampage' ANDREW TAYLOR
Bombay, 1950
When the body of a white man is found frozen in the Himalayan foothills near Dehra Dun, he is christened the Ice Man by the national media. Who is he? How long has he been there? Why was he killed?
As Inspector Persis Wadia and Metropolitan Police criminalist Archie Blackfinch investigate the case in Bombay, they uncover a trail left behind by the enigmatic Ice Man - a trail leading directly into the dark heart of conspiracy.
Meanwhile, two new murders grip the city. Is there a serial killer on the loose, targeting Europeans?
Rich in atmosphere, the thrilling third chapter in the CWA Historical Dagger-winning Malabar House series pits Persis against a mystery from beyond the grave, unfolding against the backdrop of a turbulent post-colonial India, a nation struggling to redefine itself in the shadow of the Raj.
'Khan writes with a charming formality and brings his characters and their dilemmas to life in this intelligent and intriguing series' LITERARY REVIEW
'A rip-roaring adventure with a formidable woman at its heart' AMBROSE PARRY
'A stunning, richly imagined and downright thrilling mystery. Vaseem Khan has that rare ability to transport you wholly to a bygone time, and he does so with such skill and charm. I loved it' CHRIS WHITAKER
'One of my top reads this year. A peerless portrait of early independent India through the eyes of new crime fiction star, India's first police detective, Persis Wadia' BARBARA NADEL
"The brilliant Persis Wadia is one of the most electrifying figures in crime fiction today. Vaseem Khan keeps getting better and better' WILLIAM SHAW
'Outstanding' IMRAN MAHMOOD
'This is historical crime fiction at its sharpest' SUNDAY TIMES
'Vaseem Khan gets better with each book. A triumph! An intriguing mystery, a wonderfully realized historical setting and characters that make you fall in love with them' STEVE CAVANAGH
'Think Mick Herron in Bombay' THE TIMES, Audiobook of the Week