The Lady Who Loved Bones 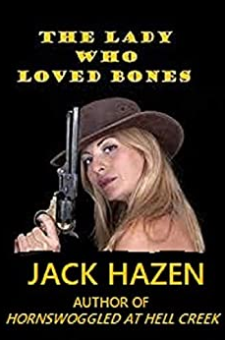 The wild west just got wilder. The widow Hannah Monroe, a beautiful blonde paleontologist from Philadelphia, ventures into the remote parts of the Montana Territory in the late spring of 1867. The members of her expedition, organized and financed by Professor Joseph Leidy of the Academy of Natural Sciences, are massacred by Cheyenne on the warpath along the Bozeman Trail. She is captured but is rescued from a horrific fate of rape and enslavement by the enigmatic Hex Hawkins, mountain man, former spy during the war, and owner of a secret gold mine.Lady Monroe, as she becomes known, must obtain the resources to establish a new expedition. Utimately their party searches the Hell Creek Formation for the fossils of terrible lizards and other ancient creatures. Along the way, they encounter not only Indians bent on murder and mayhem, but sadistic outlaws, deadly animals including an angry grizzly bear, and a sect of religious zealots. That summer Hannah makes incredible discoveries about herself and the world we live in. Can she prove that a woman can do anything a man can do?