The Korean Word For Butterfly 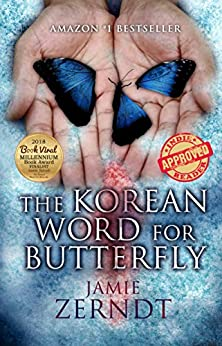 Set against the backdrop of the 2002 World Cup and rising anti-American sentiment due to a deadly accident involving two young Korean girls and a U.S. tank, The Korean Word For Butterfly is told from three alternating points-of-view:Billie, the young wanna-be poet looking for adventure with her boyfriend who soon finds herself questioning her decision to travel so far from the comforts of American life;Moon, the ex K-pop band manager who now works at the English school struggling to maintain his sobriety in hopes of getting his family back;And Yun-ji , a secretary at the school whose new feelings of resentment toward Americans may lead her to do something she never would have imagined possible. The Korean Word For Butterfly is a story about the choices we make and why we make them. It is a story, ultimately, about the power of love and redemption.**Warning: This book deals with the following themes: racism, abortion, alcoholism, and child abuse**