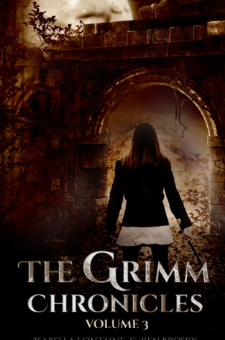 The award-winning Young Adult adventure series reaches its penultimate volume! This collection contains the following books:Book 7: The Giant SlayerEurope: birthplace of Grimms' Fairy Tales. An unfamiliar land, brimming with its own breed of Corrupted who hide in the shadows, growing more evil with each passing day. For modern-day hero Alice Goodenough, this is more than enough to worry about. But she also has a fencing tournament to think about.And a promise to keep with Sam Grayle, a Corrupted dwarf who schemes for more and more wealth. When their train breaks down in a small town in eastern Hungary, Alice finds the legacy of the hero is alive and well. Corrupted have visited this town before, and they aren't quite vanquished just yet. There's one left, hiding away, biding his time to enact a terrible price on his enemies. A little creature with big, big plans ...Werewolves. Vampires. Giants. Europe is a different place with new dangers, new monsters and new surprises.Book 8: Darkness Rising200 years ago, the Brothers Grimm brought their stories to life.But why? The question has haunted the heroes for two centuries, and no one has come close to the truth. Alice Goodenough will learn the terrible truth. And it will come at a terrible cost.The fencing tournament is in just a few short days. Alice's team is hopelessly outmatched, facing off against fencers who have more experience and an inhuman amount of energy. But the other fencers also have a special drug, one that Alice's team can use to even the playing field. Whether they should take the drug or not threatens to tear the team apart.Meanwhile, Alice must live up to her agreement with Sam Grayle, who lusts after a hidden treasure that once belonged to the Corrupted. Alice must team up with a group of explorers and delve deep into a forbidden cave that holds more secrets than any of them expected.Book 9: MalevolenceThe Malevolence has been biding its time inside Castle Vontescue, but now Alice must finally confront it. The very same evil force that brought the Grimms' fairy tales to life now threatens the hero and all she holds dear. No one is safe in the darkness.But what, exactly, is this centuries-old creature? To find that out, Br'er Rabbit will have to use all of his wits and decode a series of clues before time runs out. Meanwhile, Alice must keep her friends close and fight through her numerous injuries if she hopes to stop the evil.But nothing is certain. Alice's body is breaking down. Her loved ones are in constant danger. There is no escape now ... soon, she must face off against the ancient evil that lurks within Castle Vontescue.And there will be blood.This volume also contains the following extras:- The lost diary of Abigail Bauer- An exclusive introduction... And the following Grimms' Fairy Tales:- Hans in Luck- The Brave Little Tailor- Tom Thumb- Twelve Dancing Princesses- Rapunzel-