The Ghosts of Varner Creek 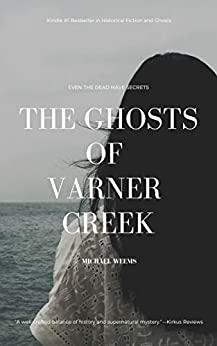 •A Kindle #1 Bestseller in Historical Fiction and Horror/Ghosts •An Amazon Top 100 Rated in Fiction, Top 10 in MysteriesAuthor note: The Ghosts of Varner Creek is not a horror story or thriller. This is a paranormal mystery set in the old South wherein the ghosts are both literal and symbolic of past events which haunt the characters of the story. The novel uses the plot to explore difficult subject matter at times and it is suggested for readers 18+ due to adult content and themes. Reader discretion is advised.A well-crafted balance of history and supernatural mystery. -Kirkus ReviewsKirkus ReviewsAt 87, Solomon "Sol" Mayfield is taken on an otherworldly journey to discover what really happened to his family. Sol has been able to see ghosts ever since his mother and sister mysteriously disappeared when he was a child. When he dies in a nursing home in the second chapter of the novel, it's only the beginning of his story. He's reunited with his sister, Sarah, who reveals family secrets he was never able to learn while he was alive. The novel flashes back to 1909, when Sol was 12 and Sarah was 13. The day after Sarah's birthday, Sol wakes up to find that his mother and sister are gone. Many in their small town of Varner Creek, Texas, assume that Sol's mother, Annie, had finally had enough of his abusive father, Abram; others suspect foul play. Abram blamed Annie for Sarah's Down syndrome and for trapping him in a small town by becoming pregnant at 14. Sent to live with his Aunt Emma and Uncle Colby, Sol is visited one night by what appears to be Sarah's ghost. Is his sister dead? If so, who killed her? And what about their mother? Sol sets out to find the answers, some of which are not revealed until decades later. Weems' story unfurls slowly, at a pace that feels consistent with life in a small Texas town. He has an impressive knack for dialect, and regional accents and idioms help bring the characters into vivid relief. Also, Sol's self-deprecation and world-weary charm make him an instantly likable narrator. While it's easy to get pulled into his story, the narrative sags a bit in the middle when the reader is given a thorough history of how Sol's parents met, which doesn't feel entirely necessary to the main story. When the final mystery is unveiled, however, the solution is sufficiently unexpected if not completely shocking.