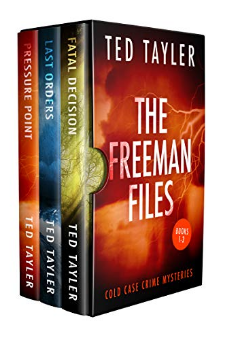 Gus Freeman has spent the past three years alone. Freeman’s wife, Tess, died from a brain aneurysm six months to the day after his retirement. Gus is still coming to terms with his enforced solitary existence.

In their first case, the team try to discover who murdered Daphne Tolliver while walking her dog in the local woods.

The newly-formed Crime Review Team is investigating cold cases that defied their colleagues.

Austerity cuts mean that Gus Freeman only has a team of three to assist him.

DS Alex Hardy - a pursuit motorcyclist, currently using a wheelchair as he recovers from a high-speed accident.

DS Neil Davis - a bright young detective, whose family members have served in the Wiltshire force for generations.

Barmaid, Trudi Villiers, was brutally murdered as she walked home in the early hours.

"She may have had a string of lovers, but she was someone's daughter. We must find her killer."

Will it be third time lucky? The victim’s profession might make it hard to find someone to talk.

‘Pressure Point’ has a wide array of characters, and offers action, romance, humour and drama.

“The multiple dimensions to the characters give these books a genuine slant. The relationships between the characters are worked smoothly into the plots.”