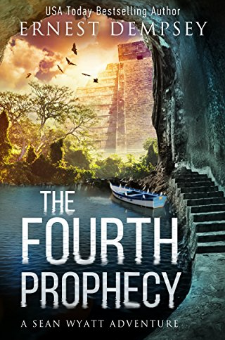 Washington is at a standstill. It’s not political gridlock that’s paralyzed the capital of the United States this time.A ruthless killer is assassinating members of Congress, leaving authorities with neither clues nor hope to stop the slaughter. Fear grips the city as the federal government grinds to a halt.So, where are former government agent Sean Wyatt and his sidekick, Tommy Schultz? They’re thousands of miles away in the middle of the Mexican rain forest, leading a private mission for one of the congresswomen targeted by the murderer.The congresswoman is convinced ancient documents in her possession hold the keys to a new world—a golden age without murder, scandal, or lust for power.Sean and Tommy should be so lucky.In their quest to solve another ancient, deadly series of riddles, Sean and Tommy take on Mexican drug cartels, counterrevolutionary guerrillas, and shady mercenaries—and learn that, yet again, nothing in either the modern or the ancient world is what it appears to be.In his grittiest thriller yet, Ernest Dempsey again thrusts readers into the heart of the global criminal underworld. Swarmed by spies, shysters, and professional slayers, Dempsey’s vision of international treasure hunting would send even Indiana Jones running for retirement.