The Fall of Fortresses 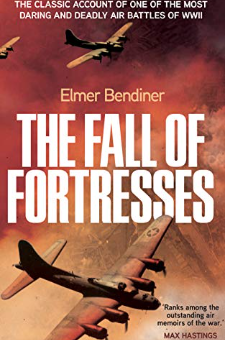 ‘A SHINING ACCOMPLISHMENT. A CLASSIC' NEW YORK TIMES‘RANKS AMONG THE OUTSTANDING AIR MEMOIRS OF THE WAR' MAX HASTINGSOn an August morning in England in 1943, a group of American airmen were told that before the day was out they would deliver the blow that would win the war.Flying the legendary B-17 Flying Fortress, their mission was to destroy the industrial facilities that kept the Nazi war machine in business – Schweinfurt’s ball-bearing factories.But a determined and ferocious defense awaited the bomber crews of the USAAF’s Mighty 8th.Somehow, Navigator Elmer Bendiner and his crew survived, their faithful B-17, Tondelayo, carrying them home. Hundreds of their young compatriots did not.Vivid, powerful and often viscerally engaging, THE FALL OF FORTRESSES is a stunning testament to the skill, courage and sacrifice of the men who fought in WWII’s deadliest campaign.‘An enduring classic’ Daily Beast‘Exceptional. It’ll stay with you long after you’ve turned the last page’ Rowland White‘Masterly and moving’ Sunday Telegraph* * *Elmer Bendiner was born in Pittsburgh, Pennsylvania in 1916. Following the death of his father his family moved to New York City, where he spent much of his adolescence. He worked as a reporter, married in October, 1941, and, one week after the attack on Pearl Harbor, enlisted in the Army Air Corps. He served as navigator on Tondelayo, a B-17 ‘Flying Fortress’ and was awarded the Purple Heart, the Distinguished Flying Cross and the Air Medal with three oak-leaf clusters. After the war he worked as a journalist and author. Published books include A Time for Angels: The Tragicomic History of the League of Nations, The Virgin Diplomats, a chronicle of diplomacy during the American Revolution, The Rise and Fall of Paradise: When Arabs and Jews Built a Kingdom in Spain and The Fall of Fortresses. Elmer and Esther were married for sixty years. They had two daughters, Winifred and Jessica. He died on September 16, 2001.