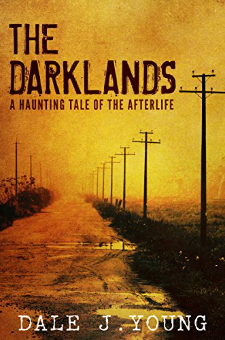 Meet Barlow McSwain, an average man from Ruin Creek, NC whose midlife crisis is about to lead him to a dark and horrifying place.Barlow’s strange journey begins when he narrowly avoids a head-on collision with a truck while riding his brand-new motorcycle. As he sits on the side of the road trying to calm his nerves, a man driving a red El Camino pulls up and invites him to have a drink at a saloon that he owns just up the road. At first Barlow doesn’t think much about the man in the meticulously-restored classic car, but when he gets back on the road and continues his journey into the mountains he starts to get the sinking feeling that something is just not right.On his way to the saloon he stops at a gas station that appears to be from a bygone era. There he meets Velton, the gas station attendant who rides a 1947 Knucklehead Harley. But there is something strange about Velton that Barlow can’t quite put his finger on. And later, when he arrives at the saloon and meets Lucy, the bartender and driver of the El Camino, Barlow begins to realize that despite what he might have thought, the near-miss he had with the truck might not have been such a near-miss after all.***Infused with healthy dose of dark humor and satire, and set against a vivid backdrop of the author’s version of Hell, The Darklands is a haunting tale of the afterlife played out in a bizarre landscape populated by the souls of the damned. Follow along the winding backroads with Barlow and Candy, a racy hitchhiker he meets along the way, as they ride through the eternal night while searching for the reason they were dealt such a horrific twist of fate. Will they find a way out, or will they suffer the same fate as the rest of the condemned souls and be forced to ride the ghost-infested roads of The Darklands forever?