The Dagger Before Me 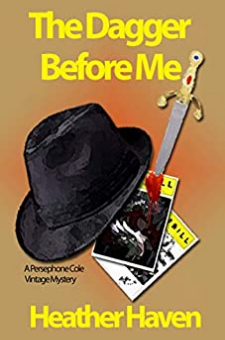 In 1942, no one had heard of a female shamus - not even in New York City -- until now. Meet Percy Cole, a newly inaugurated private investigator with a penchant for Marlene Dietrich suits, pistachio nuts, and men’s fedoras. Halloween finds her backstage, during the previews of the latest Broadway production of Shakespeare’s Macbeth, where there’s double, double, toil and trouble. When an actor falls from the overhead catwalk and breaks his neck, it’s only the latest in a series of catastrophes fueling the lore and superstition surrounding Macbeth and its supernatural power since the play's creation in 1606.In desperation, the producer hires the lady dick to save the show from closing. Armed only with her noodle and a WWI German Mauser pistol, Percy is not sure which is worse, having someone try to kill her or being foisted into the role of Witch Number Two. Is the centuries-old curse coming true or is a killer out to strike terror into the cast and crew of the Scottish play? Percy intends to strike back before anyone else dies.