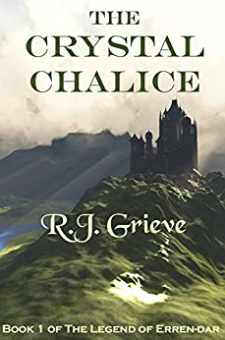 The Kingdom of Eskendria is facing the greatest threat to its existence since the fall of the legendary Old Kingdom. The cruel servants of the Destroyer, the ancient enemy of the kingdom, are creeping into the forests of the Forsaken lands ever closer to the mighty river that forms the boundary of Eskendria. Their goal: to annihilate it completely. Eskendria's allies have deserted it and its mountain passes are terrorised by a nest of brigands led by their enigmatic leader, Celedorn - the greatest swordsman in the kingdom and a man with such a savage reputation that even the minions of the enemy are afraid of him. As a final resort, Relisar, the last of the Sages, attempts to summon the champion predicted in an ancient prophesy to save the Kingdom in its darkest hour. But alas, age has diminished Relisar's powers and all he manages to summon is one ragged girl who can remember nothing about herself, not even her name. The king, desperate to avoid a battle on two fronts, sends his eldest son, Andarion, to deal with the threat from the mountains, but he is facing no ordinary adversary in Celedorn and his plans go badly awry. The confrontation in the mountains sets in train a series of unexpected events that lead to Relisar, Andarion, Celedorn and the girl with no name finding themselves on a perilous journey across the Forsaken Lands in a race against time both to save themselves and Eskendria. Yet no human being has crossed these lands in a thousand years and all that is known about them is merely legend. Are the rumours true that fragments of the Old Kingdom live on, hidden from the Destroyer? Are the stories about ancient and evil spirits haunting the forests only myth?As for the companions, who is the girl with no name? And most of all, what is the dreadful secret that Celedorn is hiding that could affect the fate of the Kingdom?