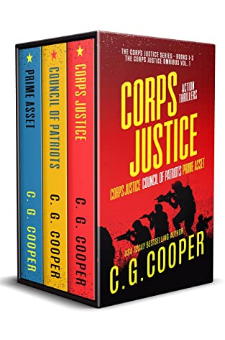 SALE PRICE FOR A LIMITED TIMEThis omnibus edition contains Books 1 through 3 of the Corps Justice Series: "CORPS JUSTICE", "COUNCIL OF PATRIOTS", and "PRIME ASSET." Three action thriller books that are sure to keep you turning pages late into the night.

BUT IT'S THE FIGHT FOR HOME THAT WILL TRULY TEST HIM.

Navy Cross recipient Cal Stokes returns from war a humble hero, ready to live out his days in peace. If only it were that easy. Evil soon rears its ugly head and plunges the Marine into the fight for his life, casting him into the darkness. When he comes to, he must use his well-honed skills to take the battle to the enemy, to fight for what is right. He must seek his own brand of justice, laws be damned.

Ex-presidents never retire. Once a patriot...A group of retired politicians join forces to protect America. The Council of Patriots is born.Former Marine Cal Stokes, and his team at SSI, head to Las Vegas, to uncover an invisible enemy that threatens to infiltrate the Democratic National Convention. What is their endgame, and more importantly: Who is the American politician pulling the strings?

What do you get when old enemies return?Nothing good. Nothing good at all...Cal Stokes’s good friend, Neil Patel, has disappeared. Following the trail to Jackson Hole, Wyoming, Stokes and his men must find the culprit and rescue their colleague before it’s too late. The only problem is that the enemy lies in wait, hoping for a final showdown.

If you like Stephen Hunter's Bob Lee Swagger, WEB Griffin's Killer McCoy, Tom Clancy's Jack Ryan, Lee Child's Jack Reacher, Vince Flynn's Mitch Rapp, Ted Bell's Alex Hawke, and Robert Ludlum's Jason Bourne, you will love Cal Stokes.The Corps Justice series has over fifteen books in total and running, plus multiple spinoffs with its most popular characters. The series has earned thousands of five-star reviews and has been downloaded millions of times to Kindles all over the world.Readers are saying..."Cooper got me hooked in the first chapter.""I can't say that I have enjoyed any series as much as this one.""Boy is it hard to work when a book is this good. Hard to go to sleep in time."

I asked Corps Justice readers what my books stand for and here's what they said:

When asked what authors they read when they're not in C. G. Cooperland, they mentioned David Baldacci, Mike Ryan, Brad Taylor, Ted Bell, Jason Kasper, David Archer, Andrew Watts and Leo J. Maloney. It's great to be associated with such an amazing cast of writers.

We're not just a list of books around here. We're a family of readers who come together to share a common bond. Why don't you join us? We'd love to have you.