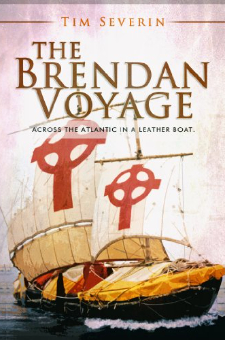 It has been described as the greatest epic voyage in modern Irish history. Tim Severin and his companions built a boat using only techniques and materials available in the sixth-century A.D, when St Brendan was supposed to have sailed to America. The vessel comprised forty-nine ox hides stitched together in a patchwork and stretched over a wooden frame. This leather skin was only a quarter of an inch thick. Yet Severin and his crew sailed Brendan from Brandon Creek in Dingle to Newfoundland, surviving storms and a puncture from pack ice. The Brendan Voyage is Tim Severin's dramatic account of their journey. Brilliantly written and impeccably researched, it is a classic of modern exploration and has been translated into 27 languages. It conveys unforgettably the sensation of being in a small, open boat alone in the vastness of the North Atlantic, visited by inquisitive whales, reaching mist-shrouded landfalls, and receiving a welcome from seafaring folk wherever the crew touched land.Praise for Tim Severin: "Enthralling" - Guardian"An extraordinary explorer." - IndependentTim Severin is an explorer, film-maker and lecturer, who has made many expeditions, from crossing the Atlantic in a medieval leather boat to going out in search of Moby Dick and Robinson Crusoe. He has written books about all of them. He has won the Thomas Cook Travel Book Award, the Book of the Sea Award, a Christopher Prize, and the literary medal of the Academie de la Marine. He also writes historical fiction.