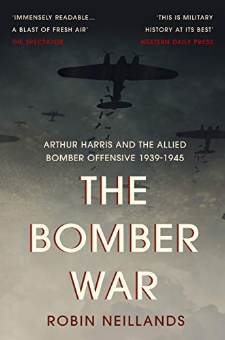 The bomber campaign against Germany is now among the most contentious actions of the Second World War.

Did it help bring the Nazis to their knees? Was the RAF wrong to bomb cities? Did the USAAF attack only military targets? Was anything achieved by killing German civilians, most of them women and children? If not, are the bombers – and especially Air Chief Marshal Sir Arthur Harris and the aircrew of RAF Bomber Command – not war criminals? Or were all means not justified against the Nazis?In this controversial book, Robin Neillands examines every detail of the campaign: the strengths and fundamental flaws in doctrine, the technical difficulties and developments from night-time navigation through bomb-aiming to fighter escort, and above all the day-by-day, night-by-night endurance of the crews, flying to the limit in discomfort and danger, facing flak and enemy fighters.

is illuminated by the personal experiences not only of British but of American, Australian, Canadian and other Allied fliers as well, this books packs an emotional punch while remaining historically accurate. Perfect for fans of Herman Wouk, Joseph Heller and the best of gripping historic fiction.

‘One of Britain’s most readable historians’ –

‘Informed and explicit, this is military history at its best’ –

‘Neilland’s willingness to call a spade a spade will catch the popular imagination. His central argument is hard to fault’ –

‘A compelling and very moving account of how thousands of British, Commonwealth and American aircrew, most in their early twenties, sallied forth both by day and by night to attack Hitler’s Reich. The statistical odds of survival were stacked against them, but they went back again and again, many paying the ultimate price.’- Major General Julian Thompson CB OBE