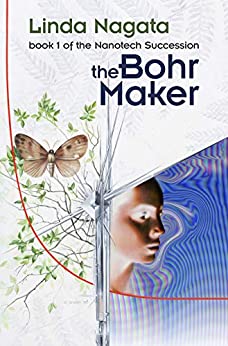 “...phenomenal....This one is a winner—grab it when you see it...” —Analog Science Fiction & Fact

An award-winning novel of nanotechnology, adventure, and high-tech revolution.
Nikko is the first “post human” genetically engineered to survive in the airless void of space. But the research permit that allows his existence is about to expire. His body has begun an insidious, pre-programmed failure that will end in his death—unless he can cancel his own expiration date. His hopes ride on an illegal and extremely powerful nanotech device known as the Bohr Maker—but his attempt to steal it soon goes awry. The device escapes to infect a young woman named Phousita who lives on Earth, in an impoverished slum, where nanotechnology runs amok, regulated only by the black market. Nikko and Phousita are from different worlds, but their convergence sets off a domino effect of unforeseeable events that threaten to change the definition of “human” for all time.

The Nanotech Succession is a collection of stand-alone novels exploring the rise of nanotechnology and the strange and fascinating future that follows.