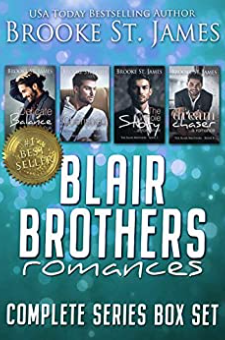 The #1 bestselling series is now available as a box set. Take a trip to scenic coastal Oregon and get swept away in the romance of it all as the Blair brothers each find their happily ever after. The Blair Brothers box set is a complete series that contains four full-length, sweet romances by bestselling romance author Brooke St. James.Delicate Balance (Book 1) I knew the Blair brothers. It was impossible to grow up in Astoria and not be familiar with them.There were four boys in the Blair family, and all of them had that certain something. They were smart, athletic, funny, and gorgeous. If I was forced to pick my favorite, it would have to be Henry. He was the wild one of the bunch—a rock star. Literally. He left Astoria years ago to chase and realize his dreams in Seattle. I still saw his younger brothers quite a bit, but it had been years since I'd seen Henry.That all changed one night when the Blair family came into the restaurant where I worked and sat at my table. Henry just so happened to be with them. I always imagined that he might be the man of my dreams, but after that night, I knew it.Cherished (Book 2) I had always dreamed of falling in love. I was ready and eager to find my happily ever after, but there was just one problem. The man I so desperately wanted to fall for was not available. He was taken—spoken for. He wasn't married, but he had been with someone for a long time. It didn’t help matters that she happened to be my friend.Some would say that's how it works, that I really only wanted him because I couldn't have him. That couldn't be farther from the truth. I had fallen for this man years ago, and he had won my heart for so many different reasons. The fact that he was off-the-market had nothing to do with my feelings for him.Did I mention that he was one of the Blair brothers? This made him even more unobtainable. Everyone in Astoria knew and loved the Blair brothers. There were four of them, and they were handsome, kind, driven, and successful. Any of them would have been a great catch. Too bad my heart already belonged to the one I couldn't have.The Whole Story (Book 3)I wasn't the only woman in the world who had been cheated on. I certainly wasn't the only woman who had sworn off men because of it. I was, however, one of the few who was willing to stick to my guns about it. Men would sometimes see that as a challenge, but before too long they would realize I wasn't interested.I planned on staying single forever, and nothing, absolutely nothing could possibly change my mind. Even a chance meeting with someone as wonderful and gorgeous as Max Blair didn't faze me. I wasn't attracted to his looks, fame, skill, or ambition. I was perfectly fine getting to know Max as a person without adding all the complications of dating. Sure, I was a little starstruck at times, but I had that under control. And then again, maybe I was a little attracted to him, too. But who wouldn't be? The problem was that he seemed to like me.Even still, I would stay single forever.Forgetting about Max Blair would be a piece of cake.Dream Chaser (Book 4)I was all set to embark on the most epic adventure of my life. I was ready for anything. My life had been filled with predictability since the day I was born, but that was about to change. I had devised a plan. Over the course of the next five years, I would live in five different cities. I would get to see, taste, and experience things I had previously only read about. I had been preparing for this moment for nearly a decade, and now it was time.Then something happened. A sweet, innocent little old lady said a few words that changed everything. She was aware of my travel plans and she urged me to make a detour. She was convinced there was something and someone waiting for me elsewhere. I thought that was nice and all… but I already a plan, and it did not include a twin named Jasper in Astoria.