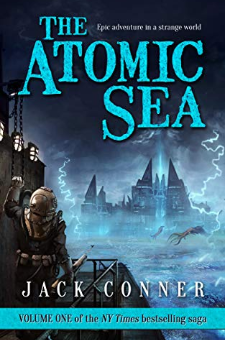 Lightning! Tentacles! Zeppelins!War rages. The dreaded Empire of Octung has taken everything from Dr. Francis Avery. His wife. His daughter. His life. Now, serving as doctor aboard a whaling ship far out on the Atomic Sea, he pulls a mysterious woman named Layanna from the lightning-wreathed depths. Somehow she’s alive, unharmed by the toxins . . . and she knows a way to stop Octung. Avery decides to aid her, even if it means taking on spies, monsters, enemy armies and all the terrors of a nightmarish world.It’s been a thousand years since the terrifying Atomic Sea has grown to encompass nearly every body of salt water on the planet, killing or mutating all it touches. Its contamination has transformed the world, but the reason for the change remains unknown—except to the Empire of Octung, the country making war on the world. Somehow the Empire is connected to the source of the mystery. But how?The Atomic Sea is the first volume in an exciting, globe-spanning series by New York Times bestselling author Jack Conner. With the grand scope of Dune or Lord of the Rings, The Atomic Sea series is an atmospheric thrill-ride in a world unlike any you've ever imagined. Download The Atomic Sea: Volume One to plunge into the adventure now!