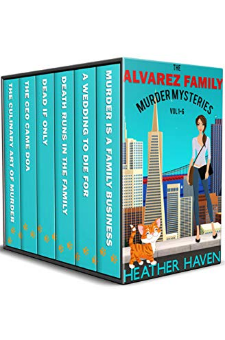 Lee Alvarez is a

who sniffs out dastardly cybercrimes from the comfort of her gilded office. But when she gets up from her desk, she often falls over a dead body or two. Not to worry. Solving murders is what she and her family are good at. They run Discretionary Inquiries, a family-owned detective agency in the heart of Silicon Valley. This set is for cozy readers who can't get enough of a smart-mouthed woman sleuth out to please her never-had-a-bad-hair-day mother, computer-genius brother, gourmet chef uncle, and energetic orange and white cat, Tugger.

Now you can get all six with one click-- delicious Kindle deal!

“One of the funniest mystery authors around. You won’t be able to put her books down. A must-read 5-star series!" National Best Selling Author, Cindy Sample

MURDER IS A FAMILY BUSINESS

Just because a man cheats on his wife and makes Danny DeVito look tall, dark, and handsome is that any reason to kill him? Lee Alvarez, half Latina, half WASP, and 100% detective doesn’t think so. Guilted by her aristocratic mother into tailing a friend’s husband to a seedy warehouse, he’s killed on her watch. She also finds an abandoned kitten destined to become hers. But in between kitty litter, kibble, and purrs, she’s determined to find out whodunit. Fans of Sue Grafton’s Kinsey Millhone, Janet Evanovich’s Stephanie Plum, and Lisa Lutz’s The Spellman Files will get a kick out of the Alvarez clan. “Heather Haven makes a stellar debut in Murder is a Family Business. Highly recommended.” Sheldon Siegel. NY Times Best Selling Author

A WEDDING TO DIE FOR

A groom arrested for murder puts a crimp in any wedding, no matter who designs the bridal gown. The nuptials of Lee Alvarez’s best friend is threatened, so Lee goes south of the border in search of the real killer. And maybe a little romance. Or is it a case of When Cupid’s Wings Start Flapping, Take Cover? “This cozy mystery has it all – romance, suspense, comedy, and a detective you’ll fall hard for.” BestThrillers Reviews

DEATH RUNS IN THE FAMILY

Competitive foot racers are dropping like flies, which sends Lee Alvarez to Vegas disguised as a dancer in a lounge lizard’s act. When she uncovers a multi-million dollar betting syndicate who kills off the competition, it’s time to hit the ground running in the Alvarez Family’s race with death. “I Just finished Death Runs in the Family and I loved it! This has turned out to be one of my favorite series and I sure hope there will be another installment in the near future!” Becky Carbone, Director Global Ebook Awards

A man who should be dead isn’t and Lee Alvarez’s very pregnant sister-in-law is about to be charged with a murder he recently committed in the Big Easy. Aided by the rest of the Alvarez Family, Palo Alto’s favorite P.I. kicks the Voodoo in the Who Do throughout New Orleans just as a hurricane hits. “Family plays a huge part in the plot, and what a family it is...For me, this was a great book. The writing was clever and I couldn’t stop laughing.” 100 Romances Project

It’s a Christmas wedding for Lee Alvarez complete with dead bodies, a missing groom, and a lethal but little known drug called Devil’s Breath. Just who planned this wedding, anyway? “I found the strongest part of the novel Lee Alvarez herself: strong, competent, and witty, in a growing tradition of tough female detectives. All in all, this is a strong work in the genre of the mystery/thriller.” San Francisco Book Review.

THE CULINARY ART OF MURDER

It's a rough day for the PI firm to the stars of Silicon Valley when their own star goes undercover at a culinary arts school to find out who did in one of the teaching chefs in the dry pantry. “A solidly entertaining mystery.” Kirkus Reviews