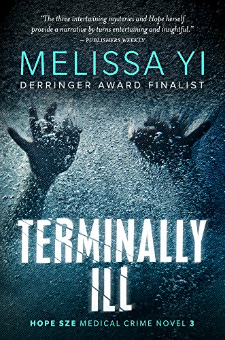 HOUDINI WHODUNITMagic? Dr. Hope Sze steers clear of magic.But when “Elvis the Escape King” chains and nails himself inside a coffin on the anniversary of Houdini's death, in Montreal’s St. Lawrence River, he can’t break free.Soon after Hope restarts his heart and saves his life, Elvis demands to know who sabotaged his stunt.Hope hung up her amateur detective badge to tend to cancer patients on palliative care.Next, she'll transfer to Ottawa and join her ex-paramour, Ryan. No more unspeakable Montreal drivers and stymied medical care. No more working with the charming yet infuriating Dr. Tucker.Hope the Escape Artist can afford to act generous. As a parting gift to Montreal, city of festivals and murderers, she'll save Elvis’s sanity as well as his skin.And so Hope plunges into her most unconventional and most terminal adventure yet.Where the magical art of escape and the subtle skill of crime vie for centre stage, and the better man may lose. Forever."[T]his novel demonstrates familiarity with the conventions of mysteries without being constrained by them and with the realities of Canada's medical world. Although the tone is light, the author is not afraid to introduce darker themes. The three intertwining mysteries and Hope herself provide a narrative by turns entertaining and insightful." Publishers Weekly"Narrating in a sprightly style while sharing some of the nitty-gritty of a resident’s job, Hope Sze is an utterly likeable character." —Ellery Queen’s Mystery MagazinePraise for the Hope Sze series #1 Mystery Selection—CBC Books, on Human Remains. Recommended authors also include Louise Penny and Maureen JenningsOne of the best Canadian suspense books , recommended by Margaret Cannon, The Globe and Mail, on Human RemainsOne of the best crime novels of the season.—CBC Radio's The Next Chapter Mystery Panel, on Stockholm Syndrome"Drawing on her personal experiences in the ER in Canada, Yi has created medical thrillers that shine with authenticity and are impossible to put down."—Kris Nelscott, New York Times bestseller