Tarzan of The Apes Series 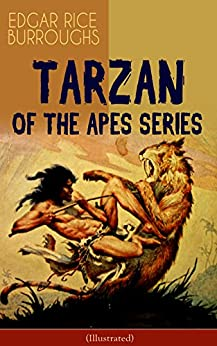 This carefully crafted ebook: "TARZAN OF THE APES SERIES (Illustrated)" is formatted for your eReader with a functional and detailed table of contents.Tarzan or John Clayton, Viscount Greystoke is the son of a British lord and lady who were marooned on the Atlantic coast of Africa by mutineers. When he was only an infant, his mother died, and his father was killed by Kerchak, leader of the ape tribe by whom John was adopted. He gets the ape name Tarzan and he is being raised in the African jungles by the Mangani great apes. Tarzan later experiences civilization only to largely reject it and return to the wild as a heroic adventurer.Edgar Rice Burroughs (1875-1950) was an American writer best known for his creations of the jungle hero Tarzan and the heroic Mars adventurer John Carter, although he produced works in many genres. Beside Tarzan's adventures, Burroughs also wrote popular science fiction and fantasy stories involving Earthly adventurers transported to various planets (notably Barsoom, Burroughs's fictional name for Mars, and Amtor, his fictional name for Venus), lost islands, and into the interior of the hollow earth in his Pellucidar stories, as well as westerns and historical romances.Table of Contents:Tarzan of the ApesThe Return of TarzanThe Beasts of TarzanThe Son of TarzanTarzan and the Jewels of OparJungle Tales of TarzanTarzan the UntamedTarzan the Terrible