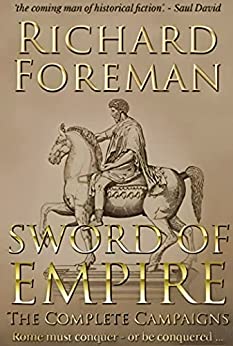 'The coming man of historical fiction.' Saul David
The best-selling ‘Sword of Empire’ novellas are collected together for the first time in one epic edition.
The ‘Sword of Empire’ series follows Marcus Aurelius and his centurion Gaius Maximus during the final years of Aurelius’ reign. The stories are a blend of action, intrigue and Ancient History.
‘Sword of Empire: The Complete Campaign’s includes:
‘Sword of Empire: Praetorian’
171AD.
Rome is at war with the northern tribes - and is yet to win a significant battle. The Germanic armies have crossed the Danube and have attacked the Empire, slaughtering thousands. The Emperor, Marcus Aurelius, is losing the support of the people and the Senate. Yet he has formed a plan he believes will change the balance of power in the region.
Aurelius has despatched an officer in the Praetorian Guard, the centurion Gaius Maximus, to escort the son and daughter of a powerful German tribal chief back to their village through enemy territory - in hope of arranging an alliance with Rome. But Maximus, to complete his mission, must contest with enemies at home, as well as abroad.
One man will change the fate of an Empire, or die trying…
‘Sword of Empire: Centurion’
174AD
As the war continues in the north Marcus Aurelius orders Gaius Maximus and Rufus Atticus to return to Rome. Enemies lurk in the shadows in the capital, spreading propaganda and sowing dissent. The praetorian guards must lure their enemies out – and defeat them.
Yet Maximus is returning home for something, or rather someone, else: Aurelia. The soldier will be caught between his duty and his happiness. Rufus Atticus will also be forced to make a choice, between the duty he owes to his Emperor and the duty he owes to his family.
The centurions will be caught-up in a web of intrigue - as well as a battle on the streets of Rome - that will decide the fate of Marcus Aurelius and the Empire.
‘Sword of Empire: Emperor’
Britain. 179AD.
The centurion Rufus Atticus is intent on finding Gaius Maximus – a fugitive and friend. Whilst doing so however Atticus finds trouble - in the form of the brutal Meriadoc clan. The Emperor, Marcus Aurelius, wants to offer the former praetorian a pardon. Atticus also has important news for Maximus, which will change his life.
But as well as offering the soldier a pardon the Emperor has summoned Maximus to ask him to complete one final mission. He must venture into enemy territory and assassinate Balomar, king of the Marcomanni. Maximus will not only need to best barbarians and the king’s bodyguard to fulfill his mission however. To succeed – and survive – Maximus will have to defy the future Emperor Commodus and defeat a band of Roman mercenaries.
Richard Foreman's books have been widely praised.
Praise for 'Augustus: Son of Rome':
'Augustus: Son of Rome forges action and adventure with politics and philosophy. This superb story is drenched in both blood and wisdom - and puts Foreman on the map as the coming man of historical fiction'. - Saul David, Author of the Zulu Hart series.
Praise for 'Raffles: The Complete Innings':
“Classy, humorous and surprisingly touching tales of cricket, friendship and crime.” - David Blackburn, The Spectator.
Richard Foreman is the author of numerous best-selling books, including 'Augustus: Son of Rome' and the Sword of Rome series of historical novellas. He is also the author of 'Warsaw', a literary novel set during the Second World War. He lives in London. You can find him tweeting at @rforemanauthor.