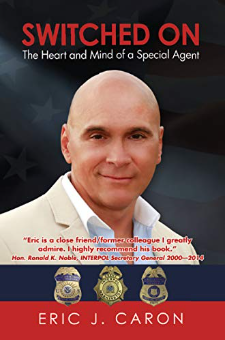 As a twin in a large Massachusetts family with a heart of gold, Eric wanted to emulate his hero when he grew up--his Police Officer father, Sgt. Edmond Caron, a former Marine. Eric's dad taught him valuable life lessons that formed his foundation and defined his path, and experience taught him the rest. With his family's courage, love and guidance inspiring his journey, the author became renowned as an expert in the field of terrorism, money laundering and transnational crime. His investigations ranged from U.S. defense contractors and CIA going rogue, to WMD programs of Iran, China and Russia, to fire and intrigue in Dubai and Afghanistan. His most challenging case would be a mere mile from his family home, and grip the nation. Throughout his twenty-five-year decorated career as a Special Agent and Diplomat for the U.S. Government, Caron discovered the powerful, life-saving effects of listening to one's heart, mind and God-given instincts. The author came to think of this principle as being Switched On. Join this Special Agent as he takes you on a ride-along filled with twists and turns and reveals the key to becoming Switched On for life.U.S. Government Special Agent and Diplomat Eric Caron (Ret.) enjoyed a decorated twenty-five-year career investigating terrorism, money laundering and transnational crime. He currently holds positions as an adjunct professor with the Massachusetts Maritime Academy on Cape Cod, and a national security / money laundering expert. He has appeared in countless print and T.V. media programs in the United States.