Stuff Every American Should Know 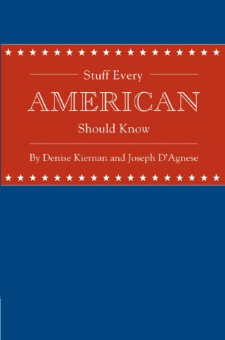 This pocket-sized companion is filled with stuff every American should know.   Who played the first game of baseball? What's a bicameral congress? Where did Mount Rushmore come from? Who is Geronimo and who do we yell his name when we jump?   Stuff Every American Should Know answers these questions plus great information on the Declaration of Independence, fireworks, the first Thanksgiving, "The Star-Spangled Banner," assassination attempts on U.S. presidents, buffalo nickels, the Statue of Liberty, how to bake the perfect apple pie, and much, much more.  From the Hardcover edition.Are the U.S. Constitution and Declaration of Independence important to you?Then you'll want to check out two other books by the authors:Signing Their RIGHTS Away: The Fame & Misfortune of the Men Who Signed the U.S. Constitution"An extraordinarily fascinating study of America's lesser-known founding fathers alongside the more well-known ones, Signing Their Rights Today is a welcome and enthusiastically recommended contribution to public and college library shelves." -- Midwest Book Review (Reviewer's Choice)"[The authors]...maintain a refreshing reverence for the Constitution itself. Rather than ask readers to believe that an 'assembly of demigods' (Jefferson's words) wrote the Constitution, Ms. Kiernan and Mr. D'Agnese challenge the notion that the group that crafted this document of enduring genius was uniquely brilliant or visionary. If this raises the question of how exactly the miracle was accomplished, it should at least give readers some hope for our own seemingly uninspired political era." -- The Wall Street JournalSigning Their LIVES Away: The Fame & Misfortune of the Men Who Signed the Declaration of IndependenceIn the summer of 1776, fifty-six men risked their lives and livelihood to defy King George III and sign the Declaration of Independence--yet how many of them do we actually remember?Signing Their Lives Away introduces readers to the eclectic group of statesmen, soldiers, slaveholders, and scoundrels who signed this historic document--and the many strange fates that awaited them. Some prospered and rose to the highest levels of United States government, while others had their homes and farms seized by British soldiers.Featured history title in Reader's Digest's, "Best of America" issue, 2009."Kiernan and D'Agnese...succeed in stripping away preconceived notions of the more famous signers, and bringing out something of interest about the other, less well known ones..."--Library Journal * "Kiernan and D'Agnese present astonishing individual portraits of all the signers" -- School Library Journal, starred review