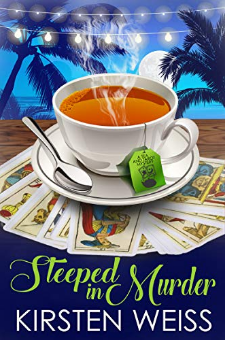 Abigail Beanblossom’s dream of owning a tea room in her California beach town is about to come true. She’s got the lease, the start-up funds, and the recipes. But Abigail's out of a tearoom and into hot water when the realtor turns out to be a conman… and then turns up dead.

But not even death puts an end to the conman’s mischief. He rented the same space to a tarot reader, Hyperion Night. Convinced his tarot room is in the cards, Night’s not letting go of the building without a fight. Steamed, Abigail realizes the only way to salvage her tea room is to join forces with the tarot reader, even if he isn’t her cup of tea.

But they must work together, steeping themselves in the murky waters of the sham realtor's double dealings, in order to unearth the truth – before murder boils over again.

Steeped in Murder is the first book in the Tea and Tarot cozy mystery series. Buy the book to start this hilarious caper today.