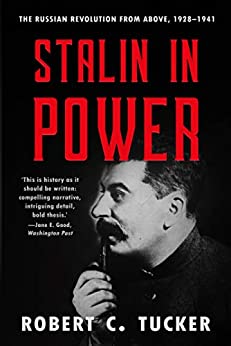 'This is the best book about Stalin that has ever been written and one that is not likely to be superseded in the foreseeable future' — W. Bruce Lincoln, Chicago Tribune
In 1929, Stalin plunged Soviet Russia into a coercive "revolution from above", a decade-long effort to amass military-industrial power for a new war. He forced 25 million peasant families into state-run collectives and transformed the Communist Party into a servile instrument. In 1939, he concluded the pact with Hitler that enabled him to grasp at Eastern Europe while Hitler made war in the West.
This book forms the second volume of Robert C. Tucker's biography of Joseph Stalin, following Stalin as Revolutionary. The author shows that Stalin was a Bolshevik of the radical right whose revolution cast the country deep into its imperial, autocratic past.
Tucker brings a fresh analysis to these events and to the terror of the 1930s, revealing the motives and methods of what he calls the greatest murder mystery of this century.
Praise for Stalin in Power:
'The most significant single scholarly contribution made to date, anywhere, to the history of Soviet power' - George Kennan, Institute for Advanced Study
'This is history as it should be written: compelling narrative, intriguing detail, bold thesis' - Jane Good, Washington Post
'Mr. Tucker’s portrait is persuasive, not least because it offers a psychological explanation for Stalin’s relentless persecution of his Bolshevik comrades as well as for the bizarre rituals of the Moscow show trials, in which he forced the revolution’s leaders to confess to absurd crimes' - The Economist
'Mr. Tucker has hunted out the sources, and he has discovered and developed a great deal more than has been generally known... An extremely valuable contribution to our knowledge' - Robert Conquest, Wall Street Journal
Robert C. Tucker was a professor of politics emeritus at Princeton University and president of the American Association for the Advancement of Slavic Studies.