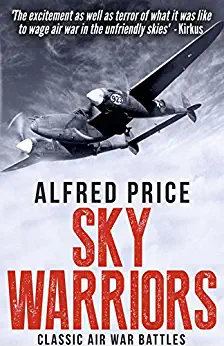 Since 1911, the sky has been an arena for combat - of the most deadly kind.

In this fascinating history, Alfred Price chooses fifteen exciting stories of air combat, including heroic tales from the Battle of Britain, Zeppelin air raids, and the Tornado spy-planes of Operation Desert Storm. Through the stories, the reader can follow the changes in military aviation over eight decades of the twentieth century. Including a detailed appendix listing the roles and specifications of each aircraft or battleship,

is a truly illuminating ‘best of’ in aviation excellence.

served as an aircrew officer in the Royal Air Force. During a flying career spanning fifteen years, he logged some 4,000 flying hours. Now working full time as an author, he has written more than thirty books on aviation subjects including

One Day in a Long War

on the hardest-fought action over North Vietnam. He holds a PhD in history from Loughborough University, is a Fellow of the Royal Historical Society and compiles aviation questions for the popular BBC programme Mastermind.