Sir Andrew and the Authoress 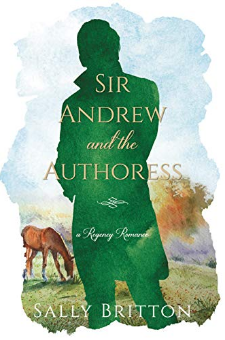 Lady Josephine, the duke's eldest daughter, has a secret. When her brother's horrid best friend discovers what she's been hiding up in the castle tower, she has no choice but to take him into her confidence.

As the daughter of a duke, Lady Josephine has a long list of responsibilities, and an even longer list of things she must never do to dishonor the family name. Josephine knows exactly which side becoming an author falls upon, but she's determined to try her hand at it anyway. For months she has worked on her novel in secret, writing chapter after chapter of intrigue and romance. Unfortunately for Josephine, her sworn enemy stumbles upon her secret.

Sir Andrew Wycomb's close relationship to the Duke of Montfort's family and heir gives him more than one advantage in life. His loyalty to the family is absolute, even if he finds at least one of its members an annoyance. He and Lady Josephine have never seen eye-to-eye. But when he discovers that she's written a novel upon a subject she knows nothing about, he cannot help but sympathize with her dream. This creates an unlikely ceasefire between them.

But things at the castle are always changing, and when a determined suitor arrives to court Josephine, Andrew has to decide which secrets he's going to keep. Especially when he discovers the one he's kept even from himself - that perhaps he doesn't find Josephine an annoyance at all. In fact, she is quite charming. The more time they spend together, the more he hopes she will realize they aren't enemies, and they could be so much more...

As the third stand-alone novel in this sereis by author Sally Britton, this story continues the Clairvoir Castle romances. This is a light-hearted, sweet romance series set during the Regency era in England.

Mr. Gardiner and the Governess

A Companion for the Count

Other books by Sally Britton include the Branches of Love regency series and the Inglewood Romances.