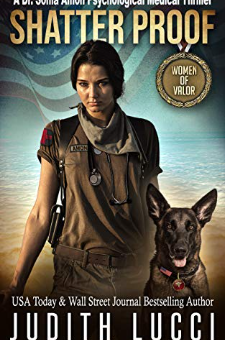 It’s hard to go home when your father wants to kill you. Syrian-born CIA operative and retired Army Major Sonia Amon is working at Walter Reed Hospital as a battlefield surgeon. She also teaches military strategy at the Army War College which provides her cover as a CIA operative for the Middle East. Sonia is recalled to Syria to rebuild a series of primary care health clinics that will offer basic care to her countrymen in war-ravaged Syria. But there is one problem. Her father is a terrorist who wants to kill her and has hunted her for many years. Sonia is as terrified of her father now as when she was a child. At eighteen, she escaped the terrorism of her father and fled to the United State and into her mother’s loving arms. After med-school, a career in the army as a doctor and professor, she wants to help the country she left behind and dearly loved. She also longs to see her fiancé, Colonel Paul Grayson who commands an Army Garrison near Aleppo.Can a terrorist’s daughter mend the wounds her father left on their people? With a command of the language, an understanding of the terrain, and her medical skills, Sonia is the perfect operative. The U.S. military and World Health Organization want to rebuild a hospital destroyed by ISIS, but Aleppo is a dangerous place. There are eyes on her everywhere. She knows she’s being watched. Is this mission too much? The CIA doesn’t think so and duty calls.And Sonia always heeds that call. Reviews“An absolute page turner that will have you on the edge of your seat. The characters are great Dr. Sonia Amon is American and Syrian. She was stolen from her mother when she was three raised by her abusive father until she escaped at eighteen. She became a doctor in The U.S. Army until she retired. She now works at Walter Reed and takes an assignment to war-torn Syria to help set up medical help for the Syrian people affected by ISIS. Her father is the number two leader for Isis. He hates Sonia and her mother. Dr. Amon is in love with Colonel Paul Grayson in charge in US forces near Aleppo in Syria.The storyline is strong it opens your eyes to the effects of the war on innocent women, children and elders in counties being torn apart by Isis. This book has so many twists and turns that you will be riveted until the very last page.I love the way this amazing author brings the characters to life before your eyes and makes you feel their emotions and their pain. I can hardly wait to see what's next by this multi-talented author.” Charleane Davis, Reviewer, Vine Voice You’ll love this psychological medical thriller, because of the mix of military romance, armed conflict, action and adventure, psychological suspense, hatred, love, and hope that make for an undeniable page turner. You won’t want to put it down. Get it and get reading…