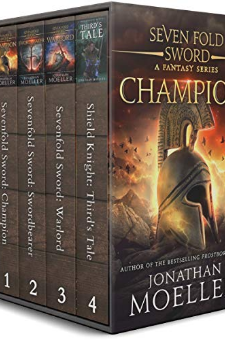 Combined for the first time in one volume are the internationally bestselling novels SEVENFOLD SWORD: CHAMPION, SEVENFOLD SWORD, SWORDBEARER, and SEVENFOLD SWORD: WARLORD, along with the bonus novella SHIELD KNIGHT: THIRD'S TALE.Ridmark Arban is the Shield Knight, the defender of the realm of Andomhaim. The realm is at peace after a long and terrible war, but dark powers threaten other lands.And when a mad elven wizard comes to the High King's court, Ridmark finds himself fighting not only for his own life, but for the lives of his family. For the quest of the Seven Swords has begun.And the quest will kill anyone foolish enough to seek its secret...