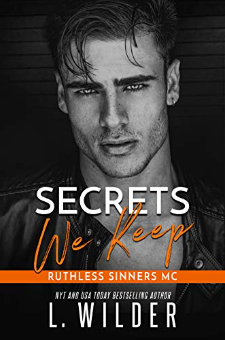 Secrets have a way of revealing themselves when you least expect it. Wall Street Journal and USA Today Best Seller L. Wilder brings you a new standalone MC packed with angst, explosive action, and chemistry that will have you begging for more.    Rafe:In my world, there are secrets at every turn. It's just the way it was in the MC.Club business was club business. Period. Marlowe Davenport, the club's new bartender, had secrets of her own.The girl was beautiful with captivating, blue eyes that could hypnotize any man. She'd come to Nashville to escape her past, and I was determined to claim her future. Unfortunately, the timing couldn't have been worse. A war was on the horizon, and as the dark clouds drew closer, I would discover Marlowe had a part to play in it--a part she didn't even know she had.  Everything she cared about was on the line--including me. That's the thing about secrets. They have a way of revealing themselves when you least expect it, and when they do, they don't give a damn about the casualties they leave in their wake.  This addition to the Ruthless Sinner's MC will have you rooting for forgiveness, mended hearts, and second chances. The Ruthless Sinners are foul-mouthed, possessive alphas who will do whatever it takes to protect their women. No cheating and a HEA. While Secrets We Keep is part of a series, it can be read as a standalone.