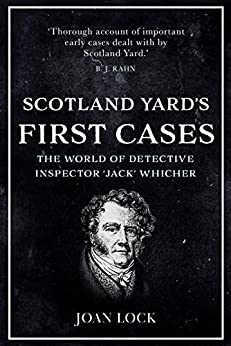 When Scotland Yard’s first detective branch was set up in 1842 crime was very different from today.

The favoured murder weapon was the cut-throat razor; carrying a pocket watch was dangerous; the most significant clue at a murder scene could be the whereabouts of a candlestick or hat; large households (family, servants and lodgers) complicated many a case and servants sometimes murdered their masters.

Detectives had few aids and suffered many disadvantages. The bloody handprints found at two early murder scenes were of no help, there being no way of telling whether blood (or hair) was human or animal. Fingerprinting was fifty years away, DNA profiling another hundred and photography was too new to help with identification. All reports had to be handwritten with a dip pen and ink and the only means of keeping contact with colleagues and disseminating information was by post, horseback or foot.

In spite of these handicaps and severe press criticism, the detectives achieved some significant successes. Joan Lock includes such classic cases as the First Railway Murder, as well as many fascinating, fresh reports, weaving in new developments like the electric telegraph against a background of authentic Victorian police procedure.

Charles Dickens said that Scotland Yard detectives gave the impression of leading lives of strong mental excitement. Readers of this book will understand why.

‘A better picture of the development of the detectives and the CID in the 19th century Metropolitan Police than any other book I have read.' – Alan Moss