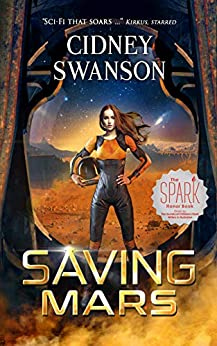 Some pilots follow orders. Others just wing it. Grounded for her Top Gun attitude, a Mars colony pilot jumps at the chance to fly a covert mission to off-limits Earth and save her world from starvation. On Earth, the Chancellor keeps a dystopian peace through a competitive consciousness-transfer program, offering perfect bodies to those who toe the line. Pilot Jessamyn’s orders are simple: get the food and get out, minimizing contact. But when the pilot’s brilliant autistic brother is captured and charged with treason, all bets are off. Jess finds an ally in Pavel, the Chancellor’s rebel nephew, but now she’s got a choice to make: rescue her brother or save Mars?"SCI-FI THAT SOARS." -Kirkus, starred reviewSaving Mars is a Sci-Fi series of colonization on Mars featuring interplanetary politics, adventure, and romance that's perfect for fans of Pierce Brown’s Red Rising or Mary Robinette Kowal’s Lady Astronaut series.