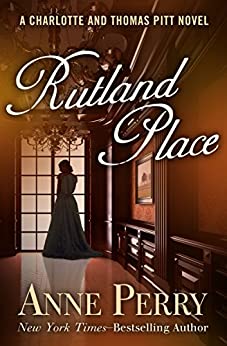 A mystery set in Victorian England by the New York Times–bestselling author whose “novels attain the societal sweep of Trollope or Thackeray” (Booklist, starred review).
When her mother asks her help in finding a lost locket with a compromising picture, neither Charlotte Pitt, nor her mother, has any idea that the locket may be at the center of a bizarre chain of events leading to murder. Arriving at her mother’s home at Rutland Place, Charlotte discovers that other residents of the exclusive neighborhood have also suffered similar small thefts. It all appears quite mild as crimes go—a light-fingered servant, perhaps. That is, until Mina Spencer-Brown, a woman known for her prying, is poisoned and dies. Inspector Thomas Pitt quickly surmises that Mina’s snooping might have led to her murder, but what secrets had she stumbled upon? And whose?  As Pitt patiently struggles to break down the protective silence of high-born neighbors, Charlotte works behind the closed doors of society’s drawing rooms to help unravel a mystery that reveals sordid secrets and the chilling, dark corners of human behavior.