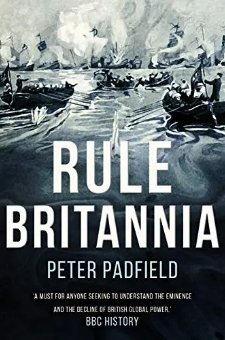 The Royal Navy of the nineteenth and early twentieth centuries was a legendary force: it claimed supremacy in every ocean, policed the empire and helped Britain to establish itself as a global superpower.

During this period the Royal Navy was completely transformed, from the wooden walls of Nelson’s time to the steel dreadnoughts, destroyers and submarines which fought at Jutland. Peter Padfield describes the struggle to adapt to the radical changes which affected every aspect of weapons, tactics, education, propulsion, training and social attitudes.

looks, in human terms, at the background to the legends that accumulate around any service as splendid and uniquely powerful as the Royal Navy, and sets down the reality in the words of those who served.

‘The best naval historian of his generation’ - John KeeganPeter Padfield

lives in Woodbridge, Suffolk. He worked with P&O and sailed with Alan Villiers in Mayflower II in commemoration of the journey of the Pilgrim Fathers.

won him international recognition as a writer. He is also the author of classic biographies of Hess, Donitz and Himmler and has written widely on the sea, including a work on naval gunnery.