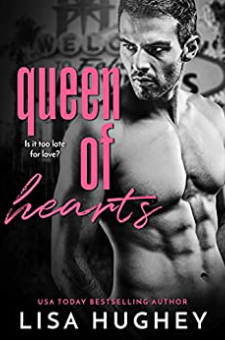 Queen of Hearts...the next installment in the Family Stone Romantic Suspense series featuring Shelley Stone (Jess's mom and Connor, Riley and Jack's stepmom) is a second chance at love romance. This 40,000 word novel features former Navy, Enrique "Bulletproof" Santana, and Shelley Stone and is set in Las Vegas.Ric Santana is in Las Vegas for his friend’s wedding and some much needed R & R. But the vacation turns awkward when he discovers his smoking hot one night stand is actually his pal’s stepmother. When Shelley’s life is threatened, Ric doesn’t hesitate to step into the role of bodyguard and protector. But as Ric grows closer to Shelley, he can’t help but wonder, can he save her life or will they be too late for love?Family Stone Romantic Suspense series:Stone Cold Heart:Jess Stone, former FBI sniper, always felt like the kid who looked in the candy store window but could never afford to go in. But on a humanitarian mission to aid an earthquake ravaged country, finally she finds a place where she fits, in Colin Davies' arms, and working for Global Humanitarian Relief, her big brother's company. But can the former SAS thaw Jess's stone cold heart?Carved in Stone:Connor Stone has always been odd man out in his family. Not the oldest, not the most charming, he'd had a lock on the youngest until another half-sibling came to live with them, so he raised hell in his youth. Con knows now the only way to redeem himself is with deeds, not words and sets out to prove once and for all he is worthy of the Stone family. When his older brother asks him to take care of business, Con finally will have redemption he craves. Except when Ava Sanchez, his brother's assistant, is threatened, he must choose between saving the girl or protecting his family. Will his choice bring him love or break his heart?Heart of Stone:Riley Stone is the handsome brother, the charming one. Everyone who meets him compares him to his father, which in his mind is not a compliment. But he's never met a woman he couldn't charm, until he meets Di, an acerbic, smart-mouthed, passionate activist who has no time for him or his charm. On the run, in the midst of danger, the blistering passion they share explodes. Can these two opposites find common ground, or will Di smash Riley's stone heart?Still the One:Jack Stone, former Navy SEAL, and oldest Stone sibling is determined to keep his family strong. Family is everything. So he starts Global Humanitarian Relief and Stone Consulting to do some good and keep his family together. But when he has to team up with his old flame, Bliss, on a missing persons case, an evil threatens him, his family and the one woman he could never forget and doesn't want to let go. Can these two former lovers put aside past hurts and heal their hearts?Jar of Hearts:Prickly Keisha Johnson has the hots for Shane Washington. But she’s not about to reveal her inner soft heart to the player pilot and open herself up to hurt, until a favor to their boss sends them undercover and under the covers. Can she trust his sensual attention or will he shatter her fragile heart?Cold As Stone: Nothing is ever set in STONE...Marine, John Pulaski, the surprise half-brother, takes a trial job at Stone Consulting with hopes of making it permanent. Given a mission to find two missing women, John will stop at nothing to uncover the secrets to their abduction. His stunning and driven partner is the only hitch in his plan.After a tragic incident two years ago, former FBI agent, Rissa Evans freezes at any sign of conflict, but she's bound and determined to overcome her personal obstacles to prove to her irresistably sexy and infuriating partner that she's got what it takes to solve the case. As John and Rissa dig deeper into the case, their unwanted attraction intensifies, taking them both by surprise.Can they let go of the scars of their past to discover what they're really looking for?